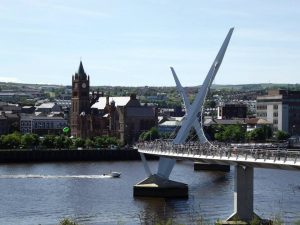 Derry, Londonderry or as it has become more commonly known as Legenderry is the second-largest city in Northern Ireland and the fourth-largest city on the island of Ireland. The name Derry is an Anglicisation of the Irish name Daire or Doire meaning “Oak Grove”. In 1613, the city was granted a Royal Charter by King James I and the “London” prefix was added, changing the name of the city to Londonderry.

The old walled city lies on the west bank of the River Foyle, which is spanned by two road bridges and one footbridge. The city now covers both banks (Cityside on the West and Waterside on the East). The city district also extends to rural areas to the southeast. The population of the city proper (the area defined by its 17th-century charter) was 83,652 in the 2012 Census, while the Derry Urban Area had a population of 105,066. The district is administered by Derry City & Strabane District Council and contains both Foyle Port and City of Derry Airport.

The Greater Derry area, that area within about 20 miles (32 km) of the city, has a population of 237,000. This comprises the districts of Derry City and parts of Limavady district, Strabane district, and East Donegal (including Raphoe and St Johnston), along with Inishowen. Derry is close to the border with County Donegal, with which it has had a close link for many centuries. The person traditionally seen as the ‘founder’ of the original Derry is Saint Colmcille, a holy man from Tír Chonaill, the old name for almost all of modern County Donegal (of which the west bank of the Foyle was a part before c. 1600). Derry and the nearby town of Letterkenny form the major economic core of North West Ireland. In 2013, Derry~Londonderry became the inaugural city to be designated UK City of Culture, having been awarded the title in July 2010. 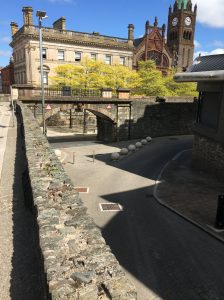 In 1608 the small town of Derry was in ruins after the onslaught by the Irish rebellion against the invasion of the English. Elizabeth I ordered the building of the walls to safeguard a new town against powerful local chiefs trying to recapture their lands. So between 1613 and 1618, the City of London Companies funded the building of the city’s walls to bring thick, strong defences for the people within. To repay the London Companies for this, the prefix London was set against Derry and so became Londonderry.

Built of local limestone the walls are 1.5 kilometres long and in places up to 8 metres high. Originally there were 4 gates with portcullis and drawbridge and later 3 more gates were added to accommodate a growing population, development and traffic. Built out from the walls are two platforms and eight bastions. Some of these held up to four cannon, many of which have been carefully restored and now sit on field carriages as if ready for firing.

In testament to those early builders, the walls have never been breached even with the sustained pounding by cannonballs, other weapons of war and tunnelling which occurred during the siege, hence the name, The Maiden City. The walls provide a full circuit to stroll around that has history at every step and also a viewpoint for every aspect of the City of Derry/Londonderry and beyond. The walkway passes over the original gates, by watchtowers and many ancient buildings including churches, chapels and cathedrals. Derry is the only remaining completely intact walled city in Ireland and one of the finest examples of a walled city in Europe. The City Walls are the largest ancient monument in the North of Ireland.

The city centre has two main shopping centres; the Foyleside Shopping Centre which has 45 stores and 1430 parking spaces and the Richmond Centre, which has 39 retail units. The Quayside Shopping Centre also serves the city-side and there is also Lisnagelvin Shopping Centre in the Waterside. These centres, as well as local-run businesses, feature numerous national and international stores. The city centre has a network of streets where you will find some of the finest independent shops, boutiques, crafters, jewellers and gift shops in Northern Ireland. The streets are full of character and charm and our local traders look forward to welcoming you.

The city has enjoyed a boost to its economy with increased visitor numbers and tourism in recent years. The nighttime economy has been transformed and continues to grow from strength to strength alongside the wide range of offerings from the hotels, bars, clubs, restaurants, wine bars, traditional pubs, theatres and venues. The walled city is home to some of Ireland’s most creative and innovative arts venues, with a vibrant mix of music, performing arts, dance, community, theatre and digital arts.