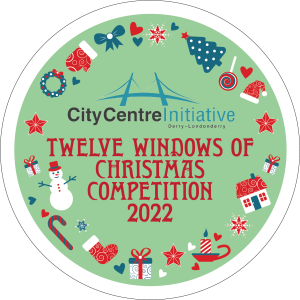 City Centre Initiative launched its annual Christmas Window Competition this week and is calling on local traders to get creative with their shop window displays this festive season.

The competition, which has been running for over 20 years, has encouraged traders to add some Christmas sparkle to their window displays to help attract custom and add to the overall Christmas cheer of the city centre for local and visiting shoppers.

The competition has expanded significantly over the past few years, according to Jim Roddy, Chief Executive and City Centre Manager at City Centre Initiative (CCI), and he commended the efforts of local businesses that have participated and improved the atmosphere of the city centre during the festive season.

He added: “Every year, city centre businesses make a great effort to dress their windows and get involved with the competition and each year we see the number of entries becoming more creative.

“While we have three fantastic prizes up for grabs for the top three windows, this isn’t about who wins or loses; it’s about coming together as a city centre community to provide everyone with a fantastic shopping experience in our city. We have the opportunity to provide a unique Christmas shopping experience to the public while also increasing visitor numbers which is why participating is so important, so let us show everyone our sparkle this Christmas.”

The public will choose the winners from a shortlist of twelve businesses that represent the city centre’s “Twelve Windows of Christmas.” Votes can be cast on the CCI Facebook Page, but can also be made by email and post. The City Hotel, Foyleside Shopping Centre, and Maldron Hotel once again provide the three top prizes. All city centre businesses are welcome to enter the competition.

“We now request that businesses in the city centre let us know that they wish to enter their business into the competition by 4pm on Friday 25th November.” Lorraine Allen, Project Manager at CCI, concluded.

“Judging will take place between the 28th and 29th of November and on Wednesday 30th of November the “Twelve Windows of Christmas” will be presented to the public for voting on Facebook. Votes will be open until 10am on Friday, December 9th and winners will be announced later that day. On Monday, December 12th, we will present awards to the winners at the Guildhall along with the Mayor of Derry City and Strabane District.”